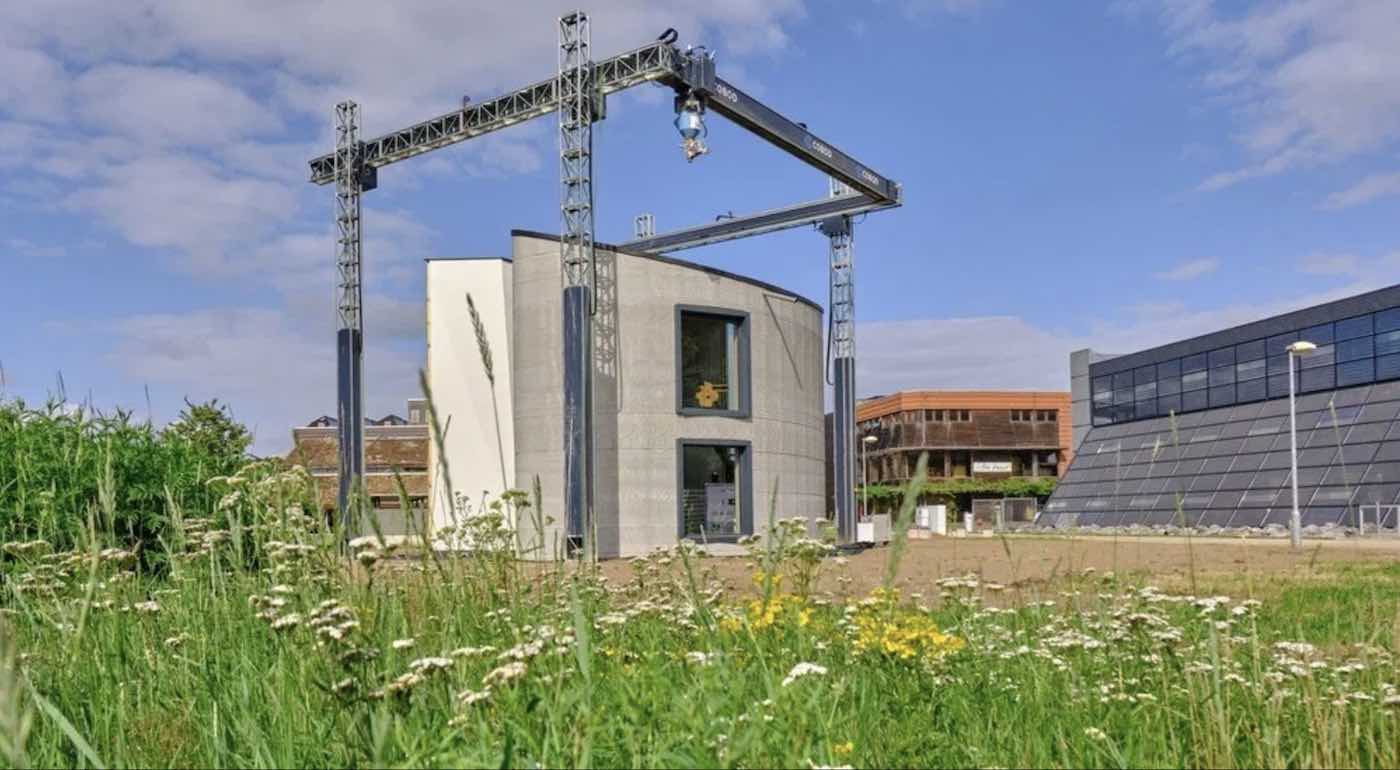 The largest 3D-printed home ever made in Europe—a two story affair with two living rooms, a kitchen, bathroom, and foyer—has recently been completed by the Belgian sustainable construction company Kamp C, hugely advancing the science of 3D-printed housing.

Kamp C used a 32 x 32 foot “gantry” printer, the largest of its kind in Europe, to create the shell of the two-story building. Using a special cement mixture ejected from the printer’s nozzle, the on-site work took only 3 weeks, with construction workers adding the roof, foundation, floor, windows, doors, plumbing, and electrical by hand. (See the time-lapse video below.)

The 980 square-foot building also featured some unique sustainable touches like underfloor heating and solar panels which were added later.

Of the benefits of 3D-printing, also known as “additive manufacturing,” the precise work of the machine cuts costs of materials—sometimes enormously.

Marijke Aerts, the project manager, told News Atlas: “The material’s compressive strength is three times greater than that of the conventional quick build brick. Besides the fibers in the concrete, the amount of wire-mesh reinforcement used is extremely limited. As a result of the printing technology used, the formwork was redundant, saving an estimated sixty percent on material, time, and budget.”

In Europe, where homes are normally built with brick, mortar, and concrete, saving construction costs is not only great for one’s wallet, but for the environment as well; as it’s estimated that manufacturing concrete creates 1 ton of CO2 per every ton of material, making it one of the most carbon-intensive construction methods available to home builders.

Designed and carried out as a proof of concept, the house in Belgium was never actually intended to be lived in.

“Printing this building is mainly a statement,” Emiel Ascione, another project manager told Digital Trends. “It shows the construction industry the accessibility and potential of this technique. The benefits of additive manufacturing are already paying off in a wide range of other industries, he said. It’s about time that housing caught up with them.”

Ascione explained further that many people would like to be able to have a more unique or personalized structure to their home, but that manufacturing costs of things like towers, circular angles, sunken living rooms, and other creative designs run too high for most people.

“A huge benefit of this technique is that [it is free of] complexity,” added Ascione. “You could print a series of houses and make each of them unique without a considerable impact on the cost.”