Field of Dreams… Is This Heaven? 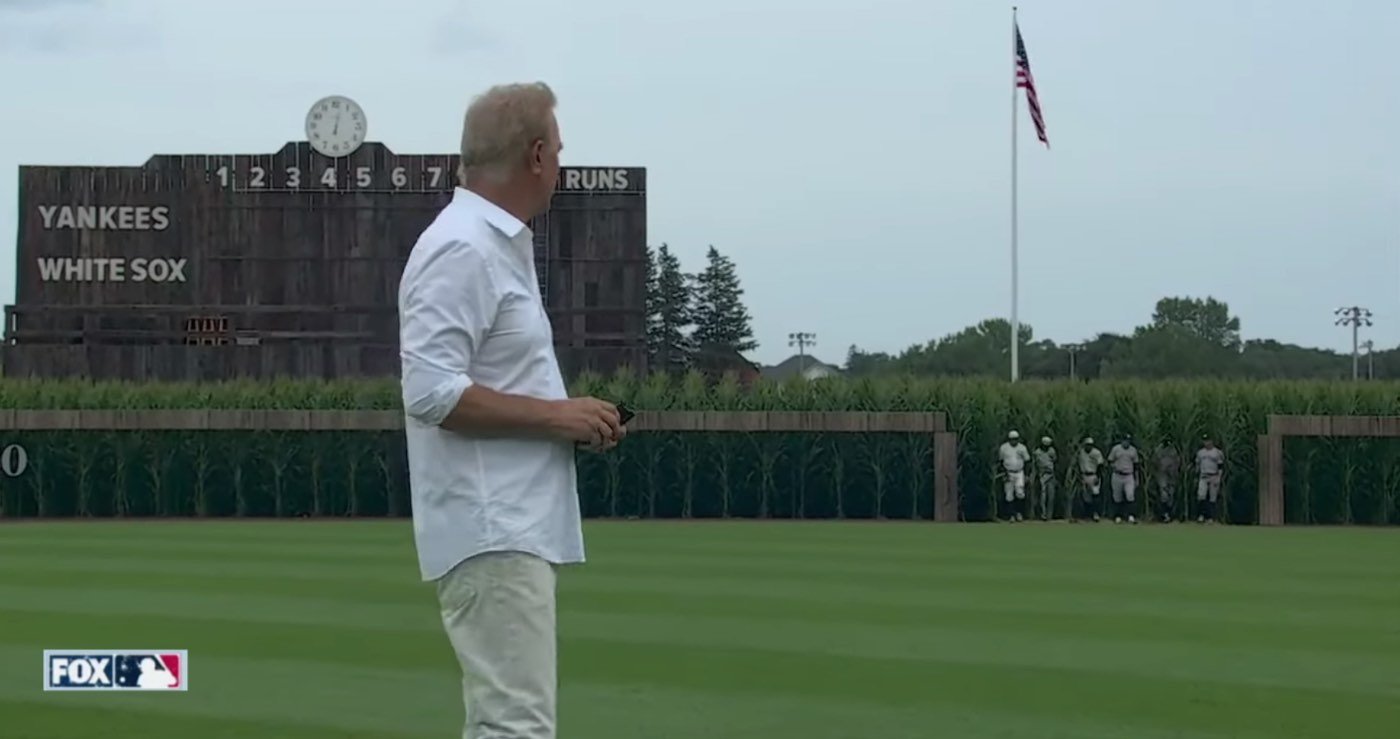 “It’s hard not to be romantic about baseball,” said Brad Pitt’s character in the film Moneyball—and this story unfolding last week on an Iowa farm is a great example.

For those lucky enough to have watched Kevin Costner’s enduring classic Field of Dreams as a young boy or girl signed up for little league, the sight of Costner and the real-life Yankees and White Sox walking through the corn stalks onto a regulation size baseball diamond to play an actual Major League Baseball game is, well, ‘perfect.’

The first-place Chicago White Sox faced the New York Yankees adjacent to the corn field in Dyersville, where the iconic film was shot—and it was the first MLB league game ever played in Iowa.

Appearing from a stretch of mature corn beyond the warning track in right field, Costner— who has a great baseball arm and threw his own pitches in movies like Bull Durham and Field—led the two teams onto the field in the video below, to rousing applause before throwing the first pitch at the game.

“Build it and they will come,” goes the famous line in the film, and indeed thousands of MLB fans from around the country showed up to watch on this perfect occasion.

Randy Peterson, writing for the Des Moines Register, recapped the thoughts of Yankees manager Aaron Boone after their team lost, 9-8.

“That’s probably the greatest setting for a baseball game that I’ve ever been a part of.”

One of the fans commented, “I was in attendance and it was by far the best sporting event I ever attended. MLB hit a home run on this!”

“(The) coolest part was, in order to get to the game you had to enter through the corn in center field on the original Field of Dreams field”

“Everything was just so well planned out.”

How perfect was it?

James Earle Jones starred in the movie as author Terrance Mann, and, now 90-years-old, he honored the project by contributing his famous deep voice to read the Fox pre-game teaser.

Sports Illustrated detailed how refreshing it was to watch a ballgame without the endless inter-inning pageantry, advertisements on the jumbotron, constant requests to “make some noise,” and blaring music.

MLB commissioner Rob Manfred said the Field of Dreams game will be back next year, likely featuring the Reds and the Cubs, cementing another special date in the MLB calendar, alongside the All-Star Game, Homerun Derby, and Post Season.

Maybe a record wasn’t set this time, but a riveting final inning delighted the crowd.

By the top of the ninth inning, Chicago was leading 7-4, after several home runs had sailed into the cornfields surrounding the park (pictured below, next to the smaller film site).

In a nightmare for the otherwise-stellar pitcher Liam Hendricks, he allowed New York to wipe out that 3-run lead after a single by Tyler Wade led to a home run by Aaron Judge—Judge’s second of the game. With just three outs left in the game, the Sox were only down by one run.

Seby Zavala made it to first base, and then Tim Anderson proceeded to hit a walk-off homer over the corn stalks where the teams had entered three hours earlier, sealing the win, 9-8.

It’s hard not to be romantic about baseball. It was perfect; it was everything a baseball fan could want. A celebration of a simpler period in the history of America’s Pastime.

Is this heaven? Pretty much.