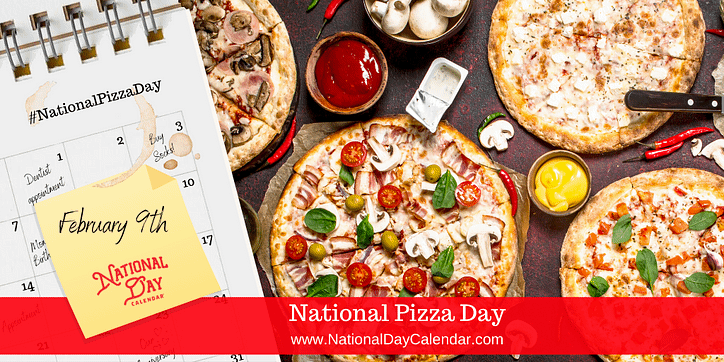 National Pizza Day on February 9th celebrates one of America’s all-time favorite foods. Whether it is thin crust, Chicago-style, deep dish, or anything in between, pizza is an American favorite.

We love our pizzas, and they come in so many varieties, too. As we nosh on our favorite, explore a few pizza facts:

You know what to do. Have your favorite pizza! Whether you visit your local pizza place or make your own, you’ll be celebrating National Pizza Day your way! Try something new. Mix up your toppings. Try a new sauce or get some crazy crust. Be sure to give a shout out to the local staple that’s always filled the pizza need. You know who we’re talking about. The ones with the secret ingredients we make classic movies about. Yeah, that’s the one. And don’t forget to check out the Celebration Deals for all the best offers and discounts.

Throw a pizza party and give the following recipes a try:

While no one knows when National Pizza Day was created – what we do know is when pizza itself was created. The original pizza was a dish created by the Romans out of placenta bread that was covered in various layers of herbs, sauce and cheese.

However, while those early dishes were technically pizzas, what people would recognize as the modern pizza wouldn’t become invented until around the 18th century. This is when some of the citizens of Naples, Italy began to create flat bread dishes covered in garlic, basil, cheese and eventually tomatoes.

During the nineteenth century, Italian immigrants began to bring this dish home to the United States. However, it really wouldn’t become popular until the service men returning from World War II returned home after developing a taste for it in Italy. This is when the pizza market in the U.S exploded and made pizza one of the most popular foods in America.

Just how popular is pizza in the United States, you ask? Well, all you have to do is look at these numbers to see how popular pizza is in this country. Every year, four billion pizzas are sold in the U.S. The majority of these are from restaurants, pizza chains and pizzerias, but about a billion of those are grocery bought frozen pizzas. For every man, woman and child in the U.S., over 23 pounds of pizza is consumed. That is a lot of pizza.

There is only one way to celebrate National Pizza Day, and that is by enjoying it in one of its many forms. Go out to your local pizzeria and grab a slice, throw an office pizza party or simply take home a frozen pizza.