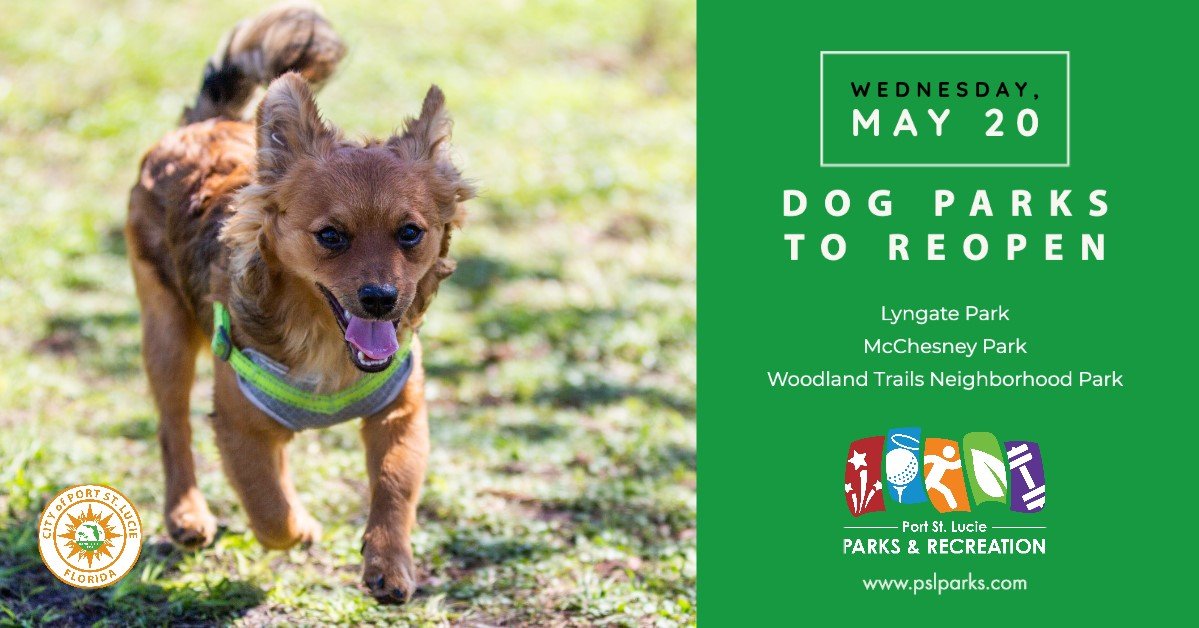 The City of Port St. Lucie’s three dog parks reopened to the public on Wednesday, May 20, 2020.

At each of the three Port St. Lucie City dog parks, Lyngate Park, McChesney Park and Woodland Trails Neighborhood Park, sanitation protocols will include: benches, access gates, pet waste stations, and other frequently touched locations will be sprayed with disinfectant each morning prior to opening to the public. Staff will spray the benches and other frequently touched locations in the afternoon, in an effort to reduce the potential spread of germs.

Staffing levels at each of our three City dog parks vary.

At this time, Lyngate Park, which is a 16-acre property, has three staff (two FT and PT) onsite to monitor the park. There is no one stationed at this Park, specifically the Dog Park section, to consistently monitor that social distancing and allowed capacity is followed. Signage will be prominently displayed, though, advising patrons to follow the protocol of no more than 10 people per dog compound within Lyngate Dog Park.

McChesney Park, which is a 24.5-acre parcel, is also staffed with a total of three FTE’s. The same staffing protocols will take place at that dog park as described above for Lyngate, and, most specifically, for the dog park located within McChesney Park. Again, while signage will be prominently displayed, when the two (at most) staff members are onsite, they will be monitoring the dog park area, however, this is no one assigned to be present at the entrance to the dog park area.

Lastly, at Woodland Trails Neighborhood Park, which a 13-acre property, there is no onsite staff present. Rather, this park, similar to the vast majority of our neighborhood parks, is unmanned and is monitored, on a “roving” basis, by our Parks Crew. There will be an added assignment for the crew to more closely frequently Woodland Trails, to ensure that, while signage is in place directing that CDC protocols to be followed, social distancing is maintained in each of the two dog compounds.