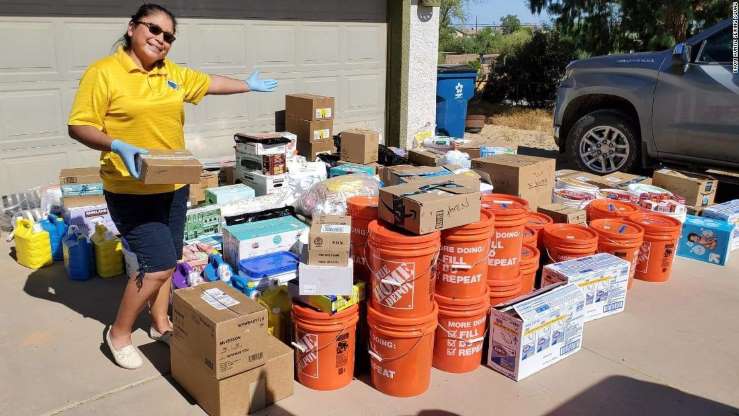 A volunteer sewing squad distributed more than 55,000 masks to vulnerable communities in 3 months. They’re not slowing down.

Kristina Wong is an actress and comedian known for her one-women shows. But she traded the stage for a sewing machine and formed a team of volunteers to make masks during the coronavirus pandemic.

The artist was preparing for the debut of her new show right before the pandemic hit the US.

“I was set to tour all over the country. The pandemic happened and I was like, ‘Oh, of course this happened.'”

Although the tour’s postponement financially hurt Wong, she did not despair.

At the beginning of the pandemic, people frantically searched for masks. Material to make them was limited. But Wong had scraps of fabric laying around her home as she sews her own stage props. She learned the basics of sewing helping her mother quilt as a kindergartener and picked up sewing machine skills in her sixth-grade home economics class.

“I was like ‘I can do this. I can sew.’ I just sort of refuse to believe that we’re powerless in these situations,” she said. “I made my first mask on March 20th. I posted on my Facebook page ‘If you are immunocompromised or don’t have access to masks, I’ll make you a mask. Just reimburse me $5 for postage.'”

Hundreds of requests for masks poured in, and Wong soon realized she couldn’t do it alone.

“I was saying ‘yes’ faster than I could sew.”

So, she posted a plea for help.

Soon, others began volunteering and Wong launched a Facebook group called the “Auntie Sewing Squad.” It started with just 26 people. Now, it has more than 800 sewers across the country.

So far, the group has distributed more than 55,000 masks to communities in need. Wong is proud of the group. But she is also frustrated.

“I do refer to our group as a ‘sweatshop’ because I don’t want to romanticize it. While we are enjoying each other’s company in this very strange time in history, we shouldn’t have to be doing this work. This is absolutely the government’s job. We should not have had to turn our homes upside down into sweatshops and pull the sheets off our beds to make masks.”

The aunties are focused on serving communities disproportionately affected by the pandemic like farmworkers, immigrants, Black and Brown citizens. They’ve also provided masks to Native Americans like those living in South Dakota’s Bear Soldier District.

“Bear Solider District has 1,500 residents, including many non-tribal members, and we are the second-most populated city on the Standing Rock reservation,” Jon Edwards, manager with the Bear Soldier Volunteer Fire Rescue told CNN. “We have a huge vulnerable high-risk population here with elderly patients and diabetic patients. The Auntie Squad has already sent a thousand masks so far. Another 600 are on the way. That was one of our main issues two to three months ago — a shortage of personal protective equipment, so it was really nice to get packages.”

Theresa Hatathlie is a volunteers with Navajo and Hopi Families Covid-19 Relief. She said 33% of the Navajo Nation members are without running water and electricity.

“Now we are leading the whole nation in terms of cases now,” Hatathlie said. “The Auntie Squad has really given us so much. Not just the masks, but we received sewing machines, diapers, baby wipes, laundry supplies and sanitizers.”

With the sewing machine donations, Hatathlie’s group is now able to make masks on their own. So far, they’ve made more than 40,000 for the Navajo Nation.

“For me personally, in our Navajo culture, we have a teaching that if you are able to help, you shouldn’t have to be asked,” Hatathlie said.

You can support Navajo and Hopi Families Covid-19 Relief by donating to this fund.

Currently, there are aunties working all over the country: from Arizona to Oregon, Pennsylvania to Florida. They sew the masks in whatever free time they have between their own jobs and family commitments.

“Many of us had never met before, and if we have met, now it’s usually just a quick exchange of handing things off,” Jessica Arna of Los Angeles, California, told CNN.

The aunties help each other by supplying fabric, sewing machines and sometimes food.

“Super aunties” in the group, like Arna, connect with organizations or individuals in vulnerable communities to access needs.

“I will announce a campaign to our group and collect pledges and make sure that the aunties know exactly what is needed for a very specific group,” Arna said.

The aunties will pledge an amount to sew by a deadline and mail the finished masks. They’re reimbursed for postage from the group’s fundraising funds.

“With the support of some of my friends and the Auntie Squad donating sewing machines, fabric, thread and elastic, I personally send out things to my students every week. And then I do a self-stamped envelope to different organizations that they send those masks to. We have sent 100 masks to First Nations,” Yoo said.

According to Arna, these aunties aren’t stopping any time soon.

“I am in awe of the labor, all of the labor that everyone has given,” she said. “I mean it’s an incredible amount of time and effort that people have shared. But it’s nothing compared to what the communities who are bearing the brunt of the pandemic are going through.”